Spoilers ahead for The Crimes of Grindelwald and the rest of the Harry Potter canon.

C: I expected to like this movie. The first one left me with a lot of questions, but it was charming and pretty and cool. So despite the ominous Rotten Tomatoes score, we went to the theater on Thursday night with hopes pretty high. Critics, after all, aren’t always fans, so if this movie was going to be a bunch of complicated set-up for a sequel, that isn’t necessarily something that I, as a fan, would actually mind.

And for the first hour or more, I thought, “Hey, this isn’t so bad. What’s all the negative press about?”

E: Agreed. There were plenty of things to like, or at least to intrigue us.

C: But the final act. Dear heavens, that final act. Did anything that happened or was revealed in the last half hour or so of the movie make logical or emotional or canonical sense?

E: You prepared us to be worried when we went two days later, but man. A LOT of issues came up in our family debrief after the movie, which we’ve condensed below.

We’ve heard a lot in recent months about the horrible things that powerful Hollywood men do behind closed office or hotel room doors, and the negative impact this has on the careers and mental health of women in the industry.

Surprisingly though, in the run-up to the biggest starry night of Tinseltown, we haven’t heard a peep about that time the Academy Awards broadcast a song-and-dance number reminding female actresses that, whatever they’ve accomplished in their careers, and however many awards their talent may earn them, the really crucial thing about them is that “We Saw Your Boobs.”

Sure, Seth McFarlane’s hosting gig was 5 years ago now. But just because the Academy didn’t say anything then doesn’t mean an apology isn’t still owed now.

Go look at it on Youtube if you must. Remind yourself of the smug expressions on the cadre of suited singing men. Of the many intercut reaction shots of mortified women who can’t believe this is happening, or are making a heroic effort to look amused (because cool girls have a sense of humor, even when the joke’s on them, right?).

The Oscars is basically Hollywood’s annual office holiday party: it’s technically “after hours,” you’re not precisely on the job, yet neither are you precisely off the clock. (As Tina Fey wittily pointed out, most actresses spend as much time dressing for the ceremony as one would for those physically transformed acting roles the Academy loves to award.) At an office party, outrageous behavior can still lead to consequences for your career.  At an office party, a man with some power in your field who hits on or objectifies you is still a candidate for a chat from HR.

So when an organization commissions a man to speak for them — which is what an MC does, albeit with jokes — and that man performs a staged, rehearsed number that is simply a list of female actors and the movies in which their secondary sexual characteristics are visible — doesn’t that organization bear a fair amount of responsibility for reducing and demeaning those actors in what was supposed to, you know, a positive moment for them? And for throwing another log on the trashcan fire that is the workplace environment of women in Hollywood?

C: Growing up as Arab Americans, the Quibbling Siblings got used to characters purportedly of our heritage played on the small and large screens by just about anyone vaguely “dark looking,” whether the actor was white, Latinx, or whatever. Notably, for the better part of a decade, this was The Face Of The Middle East to many Americans:

For those of us regularly munching kibbe and fatayer at the Lebanese picnic, however, it was really really obvious that that’s an Indian guy.

Cue the great Aladdin debacle of 2017. The filmmakers of the live action remake (because the nostalgia machine cannot be stopped) have come out and said they can’t seem to find an actor “of Middle-Eastern or Indian descent” who could play the role, despite searching for several days in London! So the internet — specifically a subset of the internet that’s passionately vocal about fairness — has pounced on them, deservedly. People who believe that Representation Matters are calling out the absurdity of the implication that such an actor could not be found. But oddly, most are not calling out the “or Indian” part of the casting call. Instead they themselves are pointing to many excellent actors from India, rather than considering the fact that we have no established Arab American or Arab British lead actors as the real problem here.

Thus, as food for thought for anyone who wants to express annoyance about this in a savvy, representation-conscious way, here’s a summary of the Three Big Problems with this well-intentioned uproar.

1. India is not in the Middle East

I know you know this. And most articles I’ve seen do acknowledge this, in a “teach the controversy” kind of way. Like, “Some people point out that Indian and Middle Eastern people are different, but wouldn’t Dev Patel make an awesome Aladdin? Also, Bollywood!”

Okay, but they are actually different. Different language groups, different cultures, different in typical appearance, quite often different in religion (though both have Muslim & Christian populations). Same goes for the other some-kind-of-Asian men being suggested (like the Filipino model whose picture I saw posted with a caption claiming him to be identical to Aladdin). The principle behind these posts is that these groups tend to have brown hair & eyes and tanner skin, and are underrepresented on film because they’re not pasty-white guys. Trouble is, you might as well be suggesting Latino actors to play Aladdin.

You know that would be messed up. I know you know it. But it’s time to apply that logic to the current situation.

2. Agrabah is definitely the Middle East

There have been several posts talking about how it’s unclear where Disney’s Aladdin is set, which is kind of true – I couldn’t pinpoint a modern country here. But it’s obviously set in a stereotypical cartoon fantasy Arabia. That’s why people who don’t like negative Arabic stereotypes got annoyed about the line: “Where they cut off your ear/ If they don’t like your face/ It’s barbaric, but hey, it’s home.” That song is called “Arabian Nights,” by the way. 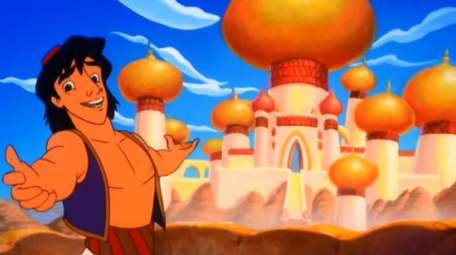 Yes, the original story has a complex ancestry, but does that actually matter given that this is a remake of the Disney film, not a reinterpretation of the old tale? If you saw the live-action Beauty and the Beast, you know they might get momentarily confused about where the movie is set (as when a Frenchman by the name of Gaston remarks that he doesn’t know what “je ne sais quoi” means), but they are dead serious about being nostalgically, painstakingly faithful to the ’90s films. So yeah, this Aladdin is Arabic.

3. Men of Middle Eastern descent rarely get work in Hollywood

Truly: even Terrorist #3 may be a Russian actor. Women fare a little better, especially if they have a mixed heritage (like Salma Hayek and Catherine Keener), but for male actors of Arabic descent who have played actual leads you get Tony Shalhoub (of Monk, notably a cable TV show not a movie), and… um, is that it? Surely I’m missing someone. Apparently Vince Vaughn is a quarter Lebanese, if that counts for anything.

And is that because there are no Middle Eastern lead parts? HECK NO. How about Gods of Egypt or Exodus: Gods and Kings or Prince of Persia, just to start with the current decade? All of those, as you know, starred exclusively Euro-descended white guys, a longstanding tradition.

“Come on though, isn’t it better to cast someone who at least isn’t white? Isn’t that a victory?” Sure. Absolutely. I would love to see more Indian leads, more Filipino leads — heck, more Latino leads in Hollywood movies. And yes, if I had to choose between Dev Patel and Jake Gyllenhaal for this role I would 100% pick Dev Patel. If those were the only options.

But let’s keep our eye on the ball here. Disney came right out and said they’re having trouble finding an actor to play Aladdin. By suggesting they cast all these non-Arabic actors, you are proving their point. We need a lead actor of Middle Eastern descent working in Hollywood yesterday, but since there’s a shortage on time machines, let’s advocate for one to get his first major film role now.

Oh yeah… what about Jasmine in all of this? According to the Hollywood Reporter, it’s down to two actresses: one Indian, and one British of half-Indian, half-European descent.

C: Hey there, Hollywood. Did you know a lot of people think you’re “too liberal”? One’s another writer for this blog, in fact. But I gotta say: I’m not seeing it when it comes to this Casey Affleck situation.

E’s the prediction guru around here, but I have one rock-solid prediction for the 2017 Academy Awards ceremony: we’re going to hear some statements made against Trump. You know, the guy who sexually harassed women who worked with him, made them feel deeply uncomfortable and belittled, came on to them despite them being married or not interested, touched them without their permission, and used his star power to get away with it all. Just like your front-running Best Actor nominee.

From football to politics, this culture has a history of overlooking men’s treatment of women because we like what they’re doing otherwise. Despite the fact that jobs like, say, being the star of a movie or the president of a country can’t actually be accomplished without working with women — women whose hard work in supporting positions is essential to the overall success of the undertaking — we still manage to class misogyny and harassment as side-issues, not relevant to the man’s accomplishment.

No one is questioning that Affleck gave a great performance. But every year, some great performances don’t take home an Oscar. That award, by the way, is “Best Actor,” not “Best Performance.” Academy of Motion Picture Arts and Sciences, what makes a good actor in your eyes? What ideal will you hold up for the American public to admire?

Hollywood, I hope you change your mind about this. Because Constance Wu is perfectly right to say that “Casey Affleck’s win will be a nod to Trump.” And your inevitable statements at this year’s award ceremony about equality, acceptance, respect, and love will ring a little false on that account.

TV actress Constance Wu: on point regarding hair + this issue

C: Since I saw this movie yesterday, my brain’s been aswirl with pressing questions, like a dark smoky cloud with random flashes in it. Short of twitterbombing J.K. Rowling, this post seemed like the best way to alleviate that pressure.

Advanced Warning: all I’ve got here are questions, not answers, so buckle up for some heavy mental turbulence. (No, I’m not bothering with a spoiler warning. If you wanted to avoid spoilers, why did you even click on a post with this title? That one’s on you.)

As I hope is already clear to those who know me, I truly enjoyed this movie. But these questions need answers. And no, I will not just go look it up on Pottermore. It’s time for some old-fashioned close reading and theory-spinning, people!

*I’m going to keep calling them Muggles unless I need to refer to the U.S. wizards’ attitude towards non-magical people, because at this point I just can’t get used to “No-maj.”
**Dumbledore’s mom: one of the thousands of Victorian women named Kendra. Um, sure, Rowling.